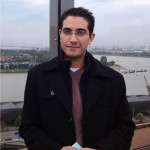 The Burkholderia cepacia complex (Bcc) comprises 24 closely related opportunistic pathogenic species with high potential to cause serious chronic respiratory infections in cystic fibrosis (CF) patients. The CF lung is a hostile environment due to host immune responses, continuous antibiotic therapy, high levels of oxidative stress and low oxygen concentration. This thesis work contributed to the understanding of the adaptive strategies of Bcc bacteria to the CF lung at a genome-wide level and with a focus on the cell envelope. The genome sequences of twenty B. cenocepacia and B. multivorans clonal variants that co-inhabited the same CF patient-lung environment, for at least 3 years, were compared. Mutation rates were in the range of 2.08-2.27 SNPs/year leading to rapid genotypic and phenotypic diversification. The comparative genomic analysis indicated that the lipopolysaccharide O-antigen locus undergoes alterations during chronic infection. A novel hybrid O-antigen locus, encoding a novel O-antigen structure only present in the first B. cenocepacia isolate, was compared with the loci of 10 subsequent clonal variants that lack the O-antigen. A systematic retrospective longitudinal screening, including 357 isolates from 19 chronically infected patients, representing 21 strains of six Bcc species, was performed to know if the loss of the O-antigen during chronic infection can be considered a general phenomenon. Only isolates from the two most prevalent and feared species, B. cenocepacia and B multivorans, showed the referred tendency. To understand the role of long-term infection in B. cenocepacia cell surface properties, atomic force microscopy was used to study cell adhesion, cell morphology and mechanical properties. The ability of the early isolate to adhere to AFM Si3N4-tip was significantly higher compared with late variants that lack the O-antigen and exhibit identical adhesion values. A reduction of cell size and cell shape evolution from the rod form typical of the species to a coccoid–like form was also observed.